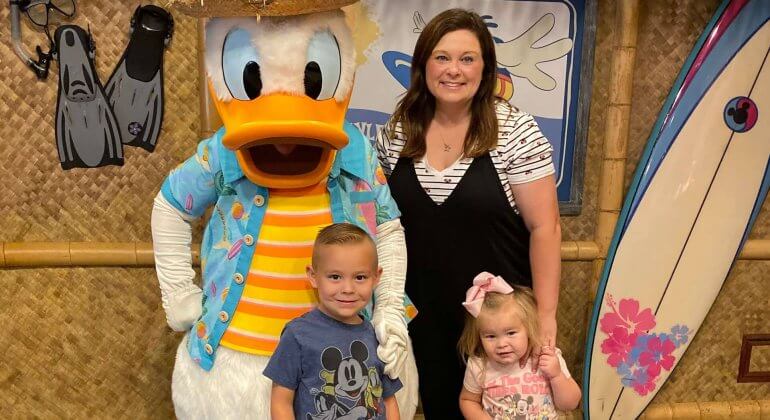 Donald Duck’s Seaside Breakfast happens at the Paradise Pier Hotel. One of the advantages to this character dining option is you don’t need a park ticket. You also don’t have to be a guest of the hotel. This is a great option for a day that your pass is blocked or you just need a little Disney magic in your life.

Heard of the anabolic bodybuilding effect? Here it is – sri rahula balika vidyalaya turinabol usa culturism with videos of culturism, fitness and nutrition.

When we arrived we had our picture made with Donald and were then shown to our seats. Donald is the only character that stays stationary and doesn’t come to your table. All of the other characters walk around and greet you at your table. However, you are welcome to go and mingle with Donald where he is.

After we were seated we headed to the buffet where there was so much yummy food waiting for us! Our first stop was the waffle/pancake station that was the perfect height for my 4 year old. They also had small chicken fingers alphabolin that I thought were great. Yummy french toast was an option as well. You can get Mickey shaped waffles AND Mickey shaped pancakes here. Who doesn’t love Mickey shaped food?!?

We then moved on to the pastry section where there was an assortment of muffins and an ice cream station!!! For breakfast! Disney is really making the kiddo’s dreams come true. LOL!

After that we hit the hot station where we found eggs, sausage, bacon and chilaquiles.

Next up was an assoment of fruit and mini beignets and donut holes. They had some that were filled with Nutella that were delicious!!

Overall I was very happy with the food. There was a variety with a little something for everyone and it was all great. When both of my toddlers eat I call it a win!!

Once we were seated with our food the characters were making their rounds. We saw Minnie, Daisy and Stitch. (Adaley wasn’t a fan of Stich HA!) All the characters were great and very interactive. They spent plenty of time with the kids. At a certain point Minnie and Daisy invite all the kiddos up to dance to beach themed music. It was really cute and my daughter loved it!

We had a great time at the Donald Duck’s Seaside Breakfast and would definatly do it again!

Breakfast with Santa at Catal Restaurant in Downtown Disney