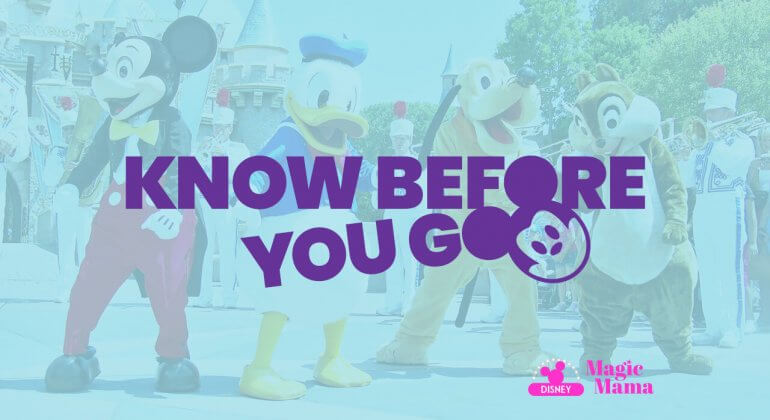 Woah! Disney had our heads spinning with all the new information released yesterday. Spinning in the best way possible! From new stroller regulations to an exciting new show, let’s dive right in!

Beginning May 1st the parks will be enforcing new guidelines for strollers. Strollers may not exceed the dimensions of 31” wide and 52” long. The good news is most strollers on the market do meet these guidelines! Also on May 1st stroller wagons will no longer be allowed. It doesn’t matter if it is push or pull, no wagons. All of this is to help ease crowd flow and reduce congestion.

Also beginning May 1st there will be no smoking areas inside the parks, the Esplanade or the Downtown Disney District. Smoking will be allowed outside of the security entrances making the parks completely smoke free. This applies to vaping as well.

Effective now, no loose ice will be allowed in the parks. Reusable ice packs are suggested to keep things cool. You can also visit a quick service restaurant for a complimentary cup of ice. This will help lines move more quickly at the security checkpoints.

Disneyland has released the name of the new parking structure located by Mickey and Friends. It will be called Pixar Pals Parking, which I love. The structure will feature characters from “Coco”, “Monster’s Inc”, “Inside Out”, “The Incredibles” , “Finding Nemo” and “Cars”. The Pixar Pals Parking Structure will bring an additional 5,000 spaces and will feature a new electronic parking system to expedite guest parking. It is set to open sometime before the end of July.

The Toy Story parking lot will also be gaining an additional 2,000 spots and adding security screening tents before boarding the Toy Story shuttle to eliminate screening in the esplanade.

So much info but that’s not all!!!

“Mickey’s PhilharMagic” will premier in April at the Sunset Theatre in Hollywood Land in Disney California Adventure. This is a 3D movie musical that will feature musical sequences from “Beauty and the Beast”, “The Little Mermaid”, “Peter Pan” and “Aladdin”

Aaaand a big surprise Jesse’s Critter Carousel opened today!! This is earlier than expected. The last update that was given said sometime in April. I can’t wait to take a ride with Jesse and her critters! Yee-haw!!

Well Disney you really delivered the news yesterday! Keep it coming!! I am loving all the new information!

Scheduled Closures and Refurbishments for Disneyland in 2019